May 01, 2020
In a world, where blocks must eat each other to survive,
and cannot eat blocks larger than themselves,
get ready to run, eat, and survive in...
GROW
In this game, you play as a blue block named dot. He's as small as a dot. (get it?) but he won't be when he eats enough food to grow giant! In his smaller state, he's on the run from large red predator blocks. But using the control stick to move around, you can find nearby food for him to eat! You'll have to check everywhere though. They can be difficult to find. There will be many levels that you travel to, with interesting new environments! No 2 levels are quite the same in this game.
Level 1, Grassy Greens, is a simple level. It's pretty easy, as it introduces the player to how the game works! It's the usual first level, nothing too crazy.
Level 2, Snowy Night, vamps up the difficulty a little bit. The enemy is larger, therefore you need to find more food to grow large enough to eat it. It's also possible to get cornered into certain areas, but nothing too crazy.
Level 3, Golden Temple, is where things get really interesting. The enemy is huge, and the entire level is a huge maze! Plus, once you've defeated the enemy, you'll get to see a cutscene with the main villains of this game, Devil Block and Block King. You'll also see a weird thing that kind of looks like a food! What could this be?
Level 4, Strawberry Island shows you what this thing is. It can enhance the power of enemies, as it makes this one very fast!
Level 5, Devil's Keep, is the final level of the game. You battle Block King, in a rather anti-climactic fashion. But then, the real challenge starts. Devil Block will fly off, and you follow him, in a series of mini challenges. However, the level's not complete yet, so you'll only be able to play part of it. But I hope you enjoy what I have so far!
Link to play the game: https://makecode.com/_c5PTy7imw4XU

Popular posts from this blog 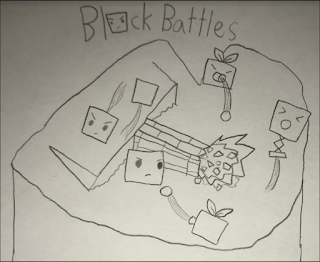 Making the game "GROW" was one of the best experiences of my life! When I first started the Game Design class, I had decided that I was going to make an RPG game called "Block Battles". It featured different tribes of Blocks that were in a huge war. And the levels are big battlefields with different things to interact with. For example, there are stairs which bring you to higher layers of the level, or wooden walls that can be destroyed. I was determined to make this game, but I couldn't figure out how to make it. It didn't seem like there was a way to make a turn based RPG in Makecode arcade. Then I had an idea for a different game. At the time, I was into a game called "Snake" where you play as a snake and eat food to grow larger. I combined this concept with my Block Battles concept to make a weird little hybrid project I would name Grow. It was simple at first, the blocks had no detail, but this concept would soon evolve into something even
Read more 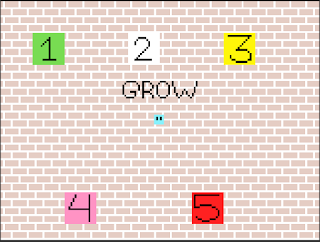 Monsters are attacking and you need to run! As small as you are compared to them, there's no way to fight them off! But if you find some Growth berries you’ll become bigger. Become larger than the enemies to defeat them in the new hit game, GROW! (Created by Hayden)
Read more